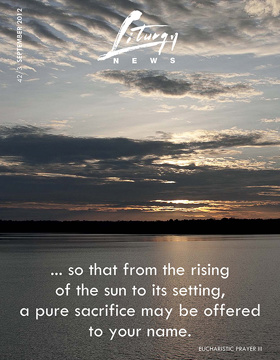 THE WOOD OF THE CROSS

With reference to the liturgy of Good Friday, I recently wrote the following sentence:  “Behold the wood of the Cross…”  The rite of Adoration of the Holy Cross refers only to a cross and not a crucifix.  A bishop who read this text noted in the margin, This is totally tendentious.  I had in fact already recast this sentence several times to ensure that it would be an unassailable statement of fact.  When I composed those words, I was keen to limit myself strictly to what was in the Missal and not to proffer any personal opinion on the way the rite should be celebrated.  My professional view however is that, since the rite gives not the slightest suggestion for using a crucifix, one normally would not be used.

Let us look firstly at the words in the Missal, both the rubrics and liturgical texts themselves.  This part of the liturgy is called the Adoration of the Holy Cross, comprising two alternative forms of the Showing of the Holy Cross and a procession of the clergy and people to reverence the Cross by a genuflection or other sign.  The priest sings an acclamation to welcome the Cross which specifically avoids the idea that one looks upon the figure of Christ: Behold the wood of the Cross, on which hung the salvation of the world.  Then, during the procession to the Cross, the following antiphon is sung:

We adore your Cross, O Lord,
we praise and glorify your holy Resurrection,
for behold, because of the wood of a tree
joy has come to the whole world.

The long, poetic hymn recommended in the Missal likewise points to the tree of the cross.
Faithful Cross the Saints rely on,
Noble tree beyond compare!
Never was there such a scion,
Never leaf or flower so rare.
Sweet the timber, sweet the iron,
Sweet the burden that they bear.

Several references to a crucifix in the rubrics of the revised Holy Week liturgy of 1956 were eliminated by the Missal of Paul VI.

Secondly we can study the principles given in the General Instruction of the Roman Missal (GIRM) as revised in the third edition of the Missal (2002-2008).  One of the revisions concerned precisely the question of cross or crucifix.  There are frequent references to the processional cross and the altar cross.  Three times, it is carefully specified in the revision of the GIRM that the altar cross is to have the image of the crucified Christ attached, that is, a crucifix is to be on or near the altar.  When the processional cross is used as the altar cross, it also is to have the image of the crucified Christ affixed.

However when once the Holy Cross for Good Friday is mentioned, no such requirement is forthcoming (GIRM 274).  To this document we may add the 1988 circular letter from the Congregation for Divine Worship on preparing and celebrating the paschal feasts, Paschale Solemnitatis.  It speaks of a ‘cross of appropriate size and beauty’ but makes no mention of a crucifix (PS 68).

Thirdly, we know that this is consonant with the history of the Good Friday ritual.  Tradition holds that the relics of the true cross were discovered in Jerusalem in the fourth century.  At the end of the century, the Spanish pilgrim Egeria writes in her travel diary of the intense veneration of the true cross on Good Friday.  As the relics spread, so too did the devotion.  In Rome, according to the eighth-century Ordines Romani, the veneration of the relics took place in the Church of the Holy Cross which was the pope’s stational church for Good Friday.  In due course it spread to churches without a relic.  Amalarius, ninth-century bishop of Metz, sighed: ‘if only the true cross were present in all churches.’  Although not every church can possess it, he said, nevertheless the power of the holy cross is not absent in those crosses that were made in the likeness of the Lord’s Cross.

Now it is true that the Latin text of the Good Friday liturgy speaks of Adoratio.  Normally we would say that we adore only God (or Christ), but venerate Mary, the saints or sacred images (even an image of Christ).  Thus the first translators of the Missal into English consciously translated the Latin as the Veneration of the Cross to avoid any suspicion of idolatry.  Likewise they proposed for the people’s response, ‘Come, let us adore the Lord’, though the final text in the 1973 Missal appeared simply as ‘Come, let us worship’.  The new translation of the Roman Missal brushes aside any qualms about misunderstanding and boldly puts the Latin into literal English: the heading is ‘The Adoration of the Holy Cross’ and the response is ‘Come, let us adore’.  However the translation now also follows the Latin in capitalising the word Cross, making it clear that we focus not so much on a physical object, but on the whole Paschal Mystery of Jesus’ death and resurrection.  The striking symbol of our salvation used here in the liturgy, however, is precisely the empty Cross, rather than the more historical depiction of the crucifixion.  On a day when we do not celebrate the Eucharist, we venerate the Cross as the altar of sacrifice and we receive the living risen Lord in the communion which follows.  The tone of Good Friday is not just lamentation at the suffering of Christ but rejoicing at the Triumph of the Holy Cross.