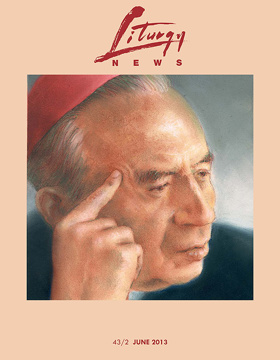 There were both cheers of joy and howls of anguish when Pope Francis cut through yet another protocol and celebrated the Mass of the Lord’s Supper on Holy Thursday, not with a grand liturgy in a Roman Basilica, but simply with a few dozen young people in Rome’s juvenile detention centre, including, among those whose feet he washed and kissed, both women and Muslims.

In his first weeks as pope, Francis has cut away the trappings of an ecclesiastical monarch, moving out of the papal apartments and eschewing bejewelled crosses, thrones and vestments trimmed with gold and ermine.  He gives us a new model of preaching, fearlessly offering the big-picture gospel, phrased in realistic down-to-earth metaphors.  Listen to his words at the Chrism Mass.  The beauty of all these liturgical things is not so much about the trappings and fine fabrics as about the glory of our God resplendent in his people, alive and strengthened…  The precious oil which anoints the head of Aaron does more than simply lend fragrance to his person; it overflows down to ‘the edges’.  The Lord will say this clearly: his anointing is meant for the poor, prisoners and the sick, for those who are sorrowing and alone.  The ointment is not intended just to make us fragrant, much less to be kept in a jar, for then it would become rancid – and the heart bitter.  A good priest can be recognised by the way his people are anointed.  This is a clear test.  When our people are anointed with the oil of gladness, it is obvious: for example, when they leave Mass looking as if they have heard good news. Our people like to hear the Gospel preached with ‘unction’, they like it when the Gospel we preach touches their daily lives, when it runs down like the oil of Aaron to the edges of reality, when it brings light to moments of extreme darkness, to the ‘outskirts’ where people of faith are most exposed to the onslaught of those who want to tear down their faith. People thank us because they feel that we have prayed over the realities of their everyday lives, their troubles, their joys, their burdens and their hopes…

We need to ‘go out’, then, in order to experience our own anointing, its power and its redemptive efficacy: to the ‘outskirts’ where there is suffering, bloodshed, blindness that longs for sight, and prisoners in thrall to many evil masters…  A priest who seldom goes out of himself, who anoints little – I won’t say ‘not at all’ because, thank God, our people take our oil from us anyway – misses out on the best of our people, on what can stir the depths of his priestly heart.  Those who do not go out of themselves, instead of being mediators, gradually become intermediaries, managers.  We know the difference: the intermediary, the manager, ‘has already received his reward’, and since he doesn’t put his own skin and his own heart on the line, he never hears a warm, heartfelt word of thanks.  This is precisely the reason why some priests grow dissatisfied, become sad priests, lose heart and become in some sense collectors of antiques or novelties – instead of being shepherds living with ‘the smell of the sheep’, shepherds in the midst of their flock, fishers of people.

I am finding it interesting to see which photos of the pope are being chosen in the media.  Pope John Paul II always stirred the crowd by lifting his hands in the air.  Although it did not come naturally, the shy and more reserved Pope Benedict tried to emulate his predecessor.  Pope Francis is different.  His first gesture was to bow his head and ask for the prayers of the crowd.  Perhaps this will mark the end of the papal personality cult for a while.  Yet the media continues to seek out photos of Pope Francis waving to the crowds.   We all find it hard to believe that there is really something new occurring.

This is true also of the liturgy.  Antiquated vesture, old liturgical forms, a preoccupation with rubrical details, all seemed to be in the ascendancy, the cudgel of ‘liturgical abuse’ wielded freely against any who sought a measure of pastoral flexibility.  And then he did it.  Pope Francis washed the feet, not of twelve priests, but of delinquents. He washed and kissed a dark-skinned foot, a tattooed foot, women’s feet and Muslims’ feet.  He had been doing this for years as a cardinal in Buenos Aires.  The reaction was as entertaining as it was predictable.

The Vatican press office squirmed to explain: It took place in a particular, small community that included young women…  To have excluded the young women from the ritual washing of feet on Holy Thursday night in this Roman prison, would have detracted our attention from the essence of the Holy Thursday Gospel, and the very beautiful and simple gesture of a father who desired to embrace those who were on the fringes of society; those who were not refined experts of liturgical rules.  That the Holy Father, Francis, washed the feet of young men and women on his first Holy Thursday as Pope, should call our minds and hearts to the simple and spontaneous gesture of love, affection, forgiveness and mercy of the Bishop of Rome, more than to legalistic, liturgical or canonical discussions.

This is exactly the argument which has been made by parishes around the world for the last thirty years.  The response has always been that the rubric says viri selecti (the chosen men) and that was the end of the question.  The law is the law.

This remained the position of Fr Paul Gunter, professor at Sant’Anselmo in Rome and liturgy secretary of the Bishops Conference of England and Wales, who said that the pope had legitimately dispensed himself from liturgical norms, but the rule stands and local churches cannot act contrary to the liturgical norms contained in authorised liturgical books.  Gunter then dug himself into a hole when he tried to explain the meaning of the rite as memesis (imitation or re-enactment).  Jesus performed the Washing of the Feet when he gave his mandatum to the twelve apostles.  Since the occasion was intrinsically attached to the institution of the priesthood, the gesture was not incomplete because of its not being extended to women.  This argument makes it incomprehensible that the pope would choose to do otherwise than wash the feet of twelve clergy.  In actual fact, the liturgical washing of the feet is not a theatrical re-enactment of the Last Supper but a ritual action of Gospel service.  It establishes a rapport between liturgy and pastoral care.  Interestingly, Pope Francis wore his stole crossed in a sign of diaconal service.  He broke from his prepared text in the detention centre to say to the young people:  Help one another.  This is what Jesus teaches us.  This is what I do.  And I do it with my heart.

I am not suggesting that everyone can or should do what the pope does.  I have never accepted that, because a pope celebrates Mass in Latin, facing East, wearing lace and Roman vestments, we should do likewise.  I have never accepted the argument that because a pope chooses to administer communion only to a kneeling communicant on the tongue, the rest of the world should do it too.  But when Pope Francis demonstrates that rubrical exactitude is not the final word, that we also need to respond to the purpose of the rite and the pastoral need of the community, then there is an important lesson to be learned.