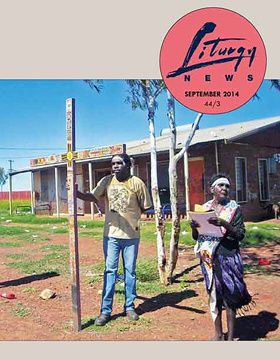 When the Synod of Bishops meets in October to reflect on the family, it will have to deal with some very challenging input received from last year’s wide consultation with lay people. In their beliefs and practice, it seems that Catholic lay people – at least in the Western world – have accommodated pastoral situations sharply at variance with official Church teaching on sexuality, marriage and the family. Since the Church bases its teachings on natural law, one would expect that the principles might reveal themselves to the discernment of all thinking people. Yet the sensus fidelium uncovered by the consultation for the Synod would suggest otherwise.

The liturgical connection with the myriad pastoral and theological issues with which the Synod will grapple is the Rite of Marriage. It relates to the situations of cohabitation before marriage, people living in de facto relationships, annulment and the status of those living in second marriages, and the recognition of committed same-sex relationships. A common catchcry is that we cannot redefine the nature of marriage. Yet a glance at the history of the Rite of Marriage suggests that we can and have.

The Council of Trent in its 24th session on 11 November 1563 boldly redefined the nature of marriage. It came at the end of a long history in the Middle Ages of railing against ‘clandestine marriages’. The Council, while acknowledging that there is no doubt that secret marriages, entered by free consent of the parties,are true and valid marriages as long as the Church has not made them null, nevertheless stated that the Church has always detested and prohibited such marriages; then, in its famous decree Tametsi, it proceeded to decree null and invalid marriage otherwise than in the presence of the parish priest or another priest with the permission of the parish priest or the ordinary, and two or three witnesses. The Church finally took control of marrying away from couples and their families.

Let us entertain for a moment a different hypothesis. Until the 12th century, there was debate about what constituted a valid marriage: in the Roman tradition, it was held to be the mutual consent of the couple, while in a northern European understanding, it was established by sexual intercourse after consent. Gratian, professor at Bologna, devised a compromise solution: consent ratifies a marriage (ratum), sexual intercourse completes it (consummatum).

The consent could take two forms. The consent de futuro (I will take you to be my wife/husband) was a promise to marry or a betrothal that established a spousal relationship. The consent de praesenti (I now take you to be my wife/husband) was the wedding itself that established the couple as husband and wife. What then of a couple who promise to marry in verba de futuro, and then begin to live together? Thomas Aquinas in the 13th century argued that this would express inward consent and so constitute a valid marriage. Since judgement needs to be made in the external forum, and since nothing is more expressly significant of consent than carnal intercourse, it follows that in the judgement of the Church carnal intercourse following on betrothal is declared to make a marriage (Summa, Suppl.46,2). For Aquinas, this leaves the wedding liturgy unrelated to the essence of the marriage but belonging rather to its solemnisation.

For the period before the Council of Trent, marrying was the business of lay people, with a church blessing often coming at the end of a process. Betrothal or a promise to marry might be followed by cohabitation with a view to marriage and eventual pregnancy, leading finally to the wedding celebration. When cases relating to clandestine marriages came to the episcopal court of Ely in the 14th century, for example, couples were not penalised for marrying without the religious formalities, they were not required to separate pending the solemnisation of the marriage, but were encouraged to do so at a convenient time and place.

At the stroke of a pen, Trent established the public wedding ritual as the act that made a valid marriage, albeit a rite that relied on the couple’s exchange of consent, which became indissoluble when the marriage was subsequently consummated. The Roman Ritual produced after the Council further tipped the balance towards the constitutive nature of the liturgy by having the priest say, Ego vos in matrimonium coniungo (I join you in matrimony), words which were mistaken for a sacramental formula along the lines of the priest’s words in the sacrament of baptism or penance. This redefinition of marriage established new relationships between marriage, the wedding liturgy, and the sexual activity and procreation. What was previously legitimate in the inbetween state between betrothal and the wedding is now deemed sinful ‘premarital sex’.

Certainly medieval clandestine marriages created some problems – whether they were vows privately exchanged, or secret marriages performed by a cleric (as illustrated in the fateful intervention of Friar Laurence in Shakespeare’s Romeo and Juliet). The public status of the couple was uncertain. That is why the Fourth Lateran Council (1215) insisted on the publication of the banns of marriage and all the sacramental education of the late medieval period encouraged the public exchange of consent in front of the church door in the presence of the priest.

Today, however, an exclusive focus on the Rite of Marriage as the sole ‘how and when’ of establishing a couple as husband and wife has created its own raft of problems. Our society has been able to register a range of situations from de facto relationships to civil partnerships to marriage itself. Whereas for the Church, the precise demands of canonical form have stymied our ability to deal with new and developing pastoral realities. When I was ordained forty years ago, couples coming to marriage preparation would carefully give different addresses. Today most would regard it as totally irresponsible to enter into the serious life-long commitment of marriage without a period of cohabitation to prove the viability of the relationship. I wonder if it would be pastorally helpful to reflect on the practice of marriage for the first 1500 years of our history.

What would it look like if we were to accept a form of betrothal which enshrined a promise to marry in the future? Could we consider cohabitation as a kind of catechumenate for marriage? We do not immediately celebrate the sacraments for an adult who wishes to join the Church but rather we begin a catechumenal process of learning and conversion of life. What would it do to the liturgy of our Marriage Rite if it were to be regarded as the crowning moment at the end of a process of marriage?

Perhaps the inclusion of an Order of Blessing an Engaged Couple as an appendix to the forthcoming Order of Celebrating Marriage might be taken as a tiny step in this direction. However I do not imagine this ‘marriage process’ unfolding under clerical control. The consent of the couple constitutes the sacrament of marriage. Could we not leave the business of establishing a relationship and moving towards fidelity and marriage to lay people – to the couple and their families. The priest then is invited in at the end to bless a committed relationship and make of it a sacrament. This might be like the early Middle Ages, when the Church’s only involvement in marriage could be for the priest to arrive at the home and bless the couple in bed.