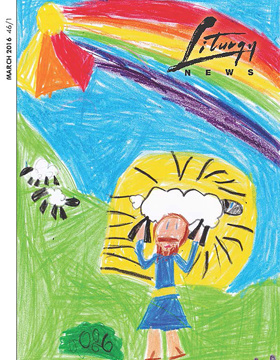 The stickler mistakes the Mandatum for a rubric. The men who have been chosen are led… to seats prepared in a suitable place. Then the priest… pours water over each one’s feet and then dries them. The little word viri/men has been something of a battle ground for the sticklers. But Cardinal Bergolio in Buenos Aires, Pope Francis in Rome, and countless bishops and parishes around the world have understood the Mandatum. It is the commandment that we love one another as Christ has loved us: If I, then, the Lord and Master, have washed your feet, you must wash each other’s feet. I have given you an example so that you may copy what +I have done to you.

On Maundy Thursday – Thursday of the Mandatum – we are not re-enacting the Gospel we have just heard. It is not theatrical playacting, but a ritual act of loving service. We may place ritual and theatre on a performance continuum.

This understanding of the kind of performance we are undertaking liberates us from the thinking that says: the priest represents Christ and (twelve) men, the apostles. What we say about the washing of the feet informs the entire celebration of the Easter Triduum. We need to go beyond the theatrical imagination that sees us at the Last Supper on Thursday evening, standing by the cross as Christ dies on Good Friday, waiting by the tomb on Holy Saturday and exulting at the resurrection on Easter day. For at Holy Thursday Eucharist, we already participate in Jesus’ Passover from the cross to glory; on Good Friday, we are gathered for liturgy because we are the living Body of the risen Christ. At each of the ritual moments, we celebrate the entire Paschal Mystery from a particular perspective.

The ritual washing of feet is a participation in Jesus’ life of loving service, a self-sacrificing love that leads directly to the cross and God’s vindication. It is the giving of himself for the salvation of the world. It is not an act directed at a chosen few. When I am lifted up, I shall draw all people to myself, says the Lord.

Washing feet has always had a special place in the liturgy of the Church of Milan. It is part of the baptismal rite. Ambrose, in his fourth-century mystagogical homilies, makes it clear that this is no mere mimetic or social gesture. There are those who try to excuse themselves by saying that it should not be performed as a mystery, not as part of the baptismal rite, not for regeneration, but that this washing of the feet should be done as a host would do it for his guests. However humility is one thing, sanctification another. You must know that this washing is a mystery and sanctification. ‘If I do not wash your feet, you shall have no part with me’.

For John’s Gospel too this action of Christ at Supper has a profound significance. The other gospels have Jesus take bread and wine and say: ‘This is my body given for you’; ‘This is the cup of my blood poured out for you’; ‘Do this in memory of me’. These ritual actions and words establish a profound link with his cross and resurrection in which we participate when we celebrate the Lord’s Supper. John instead has the washing of the feet. It too establishes a profound link with the self-sacrifice of the cross and invites our participation in the Paschal Mystery. Jesus says, ‘You must wash each other’s feet: I have given you an example so that you may copy what I have done to you.’

We see then how the ritual fits into the Mass of the Lord’s Supper of Holy Thursday. There is a special mention that, as the gifts of bread and wine are brought to the altar, gifts for the poor may also be presented. Our participation in Christ, who came not to be served but to serve, suggests that we might wash the feet of the poor and marginalised, the young and the old, the sick and the healthy, women and men.

Further the liturgy asks the priest in his homily to shed light on the principal mysteries that are commemorated in this Mass, namely, the institution of the Holy Eucharist and of the priestly Order, and the commandment of the Lord concerning fraternal charity. Each of these of course is intimately linked with the cross. A focus on the Last Supper as some sort of institution of the priesthood and ordination would tend to emphasise the need to have men for the washing of the feet. Indeed those who are unhappy with washing the feet of women fear it might be an effort towards women’s ordination. However the traditional theology of the institution by Christ of the seven sacraments is vexed, especially if we try to locate a particular moment when each sacrament was established. Instead, I would suggest, washing women’s feet represents a rebalancing of the ‘principal mysteries’ commemorated on Holy Thursday. It gives a priority to the Mandatum of mutual charity which embraces all human beings, especially those who are poor or in need.

Some of the sticklers are already blogging that the rite is optional and they would rather leave it out. The Sri Lankan bishops are pushing it as a counter-cultural sign in a country where men and women normally refrain from physical contact in public. For most of us, the new rubric for the washing of the feet will not make much difference because it simply affirms the pastoral instinct operative for decades. But it is a great opportunity for us to think again and to understand what it is that Christ has done for us.