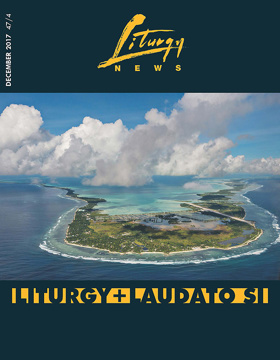 What a pity we missed out on the 1998 Revised Sacramentary! Painstakingly prepared by excellent scholars over a period of 16 years. Approved by all the English-speaking conferences of bishops who examined the text carefully in eight separate segments during the 1990s. Rejected by the Holy See.

What a pity the Congregation for Divine Worship and the Discipline of the Sacraments then felt it necessary to produce Liturgiam Authenticam (2001)! It enshrined the new statutes which had been imposed on ICEL, effectively wresting control of the personnel and processes of translation from bishops conferences. The document demanded a literal approach to liturgical translation employing Latinate vocabulary and grammar.

What a pity that the release of the new edition of The Roman Missal happened straightaway in 2002 and that the Vatican-controlled translation process swung into action. Consequently, for seven years now, the liturgical words in our mouths have so often been antiquated and arcane, the phraseology clumsy and complex.

Widespread dismay greeted The Roman Missal (2010) and many called for a return to the Revised Sacramentary. The calls have not let up. In the current issue of the Irish Theological Quarterly (82:4), for example, Neil O’Donoghue examines the history of the translation of the Missal over the last fifty years, comparing texts from 1973, 1998 and 2010. He concludes by proposing that an edited version of the 1998 Sacramentary be offered for use as an option alongside the current Roman Missal. The best would win out and, in due course, a new edition prepared accordingly.

Closer to home, Gerald O’Collins SJ has just published a useful book entitled Lost in Translation: The English Language and the Catholic Mass (Liturgical Press, 2017). As the book was going to press, Pope Francis released his motu proprio Magnum Principium and O’Collins has included a postscript describing its import. With help from John Wilkins, he presents a fulsome and well-informed account of the translation saga. O’Collins then compares the translation philosophy of Comme le Prévoit (1969) with that of Liturgiam Authenticam. He exposes the 2010 Missal to a critical examination and then turns to the suppressed translation of 1998, both its texts for the Order of Mass and its versions of the collects. He offers many enlightening examples to assess what was lost with the rejection of 1998 and the burdens saddled upon the English-speaking world with 2010.

O’Collins concludes: This book has set out to show how far superior the translation found in the 1998 Missal is to that of the 2010 Missal. I have written out of a desire that the English-speaking conferences of bishops will act quickly and, by introducing the 1998 Missal, allow presiders and congregations to celebrate the liturgy in what is truly their own language.

In an Open Letter published in The Tablet in 2015, O’Collins wickedly noted that the ‘sacral style’ of the 2010 Missal was quite foreign to the Psalms or the Lord’s Prayer. Jesus, he said, never encouraged us to say: ‘graciously grant, we pray, that you give us our daily bread’ or ‘may thy will, we pray, O Lord, be done through your prevenient grace’. He asked us to pray simply and directly to God: ‘thy will be done; give us this day our daily bread’.

WHAT NEEDS TO BE DONE?

Magnum Principium has rightly restored control of the liturgical books to bishops conferences, as it was in the beginning after the Second Vatican Council. However I do not think it is quite as simple as taking a 20-year-old book off the shelf and making it available for worship today.

Firstly there is the new Latin typical edition of 2002 to take into account. Much of the change is a rearrangement of material, sometimes of little significance, but often not helpful (Eucharistic Prayers are found in four places in the Missal, Prefaces are scattered throughout the book). Generally this would not be an issue because the pastoral arrangement of the book – a process which was addressed in the 1998 Revised Sacramentary – is again the responsibility of the bishops conferences. We could largely revert to the arrangement of 1998, but some changes would be needed: 2002 assigned Mass formularies for each weekday in Advent and Easter, for example.

There are also new texts in 2002. A new version of the General Instruction of the Roman Missal, currently available only in the difficult translation of 2010, includes extensive cross references to the 2010 Missal. Some of the texts for new saints introduced since 1973 were already incorporated in 1998, but there is a list of eleven new commemorations which were not in 1998. Other miscellaneous new texts were added in the commons and Masses for various needs and occasions. The Apostles Creed is allowed, optional Prayers over the People are given during Lent, Vigils are provided for Epiphany and Ascension, and there is a new Preface for Martyrs.

Secondly there have been changes since 2002-2010. Some new saints have been introduced to the Roman Calendar (for example, John XXIII and John Paul II). Texts from the ritual books were added to the 2002 Missal (ordination and matrimony, for example). What do we do with these now that we have the newly translated ritual books in ‘sacral’style?

More importantly, we have been using the 2010 Missal for almost a decade. We cannot pretend that this period has not existed. Indeed we have discovered some felicitous expressions that we would not want to lose. Can we ask the people so soon to change their responses at Mass? To revert to And also with you? To omit through my fault, through my fault, through my most grievous fault in the ‘I Confess’? What about the Eucharistic Prayers? The bishops decided in 1998 to make only minimal changes in the 1973 texts because they were so well known. Now we have the defective and complex texts of 2010. We really need to sit with them both, alongside the Latin originals, and make a new translation.

Finally, an integral part of the 1998 Revised Sacramentary was the introduction of original material, not translated from the Latin editio typica. There were new Opening Prayers composed for all the Sundays in the three year cycle of the Lectionary, taking their cue from the readings. There were prayers for needs and occasions in contemporary life (including the unemployed, the homeless, the addicted, prayers in time of industrial conflict and so on). New greetings, blessings and introductions were prepared for the Order of Mass. Additional Prayers over the Gifts and Prayers after Communion were composed, and new Prefaces. Early in the process new Eucharistic Prayers were composed and trialled but, when it became clear that these would no longer be approved in Rome, they were reluctantly dropped from the Sacramentary.

There was also considerable work done on developing a consistent Table of Contents, the layout of the prayers on the page, headings and outlines for the rites, reworking the rubrics, restructuring the introductory rites, and preparing pastoral notes to encourage a better liturgical celebration. All this material is an integral part of the book and cannot just be dropped out. Problem is… all this counts as adaptation as distinct from translation. Now Magnum Principium envisages that bishops conferences would do exactly this kind of work, but this would require of the Holy See not just confirmatio but recognitio. The first is a ratification by the Holy See, based on trust and confidence, of the translations whose approval comes from the bishops conference. The second involves review and examination by the Holy See to ensure that the unity of the Roman Rite has been maintained, a concept which has been taken extremely narrowly in recent decades, virtually synonymous with uniformity.

Gerald O’Collins has rightly pointed out that we have a treasure in the 1998 Revised Sacramentary. It belongs to us, the Catholics of the English-speaking world. Now that bishops have regained the freedom to do what the Second Vatican Council asked them to do in preparing liturgical books, I believe they should move to set aside the unacceptable 2010 translation imposed on them and engage again with treasures waiting to be revealed since 1998. We are not starting from scratch. It will still however demand some years of intense work to review the 20-year-old book and decide what we need to carry across from the 2010 Missal.

Politics will be the stumbling block. Unlike other language groups, English requires the cooperation of a dozen independent bishops conferences. How can we align the duckies in a row? Traditionally discussion and collaboration was assured by ICEL. But ICEL now operates under statutes reshaped by Liturgiam Authenticam. There is great uncertainty. Who says they are no longer answerable to the Congregation for Divine Worship and the Discipline of the Sacraments? The bishops conferences themselves are fearful, waiting to see what the others do, watching the manoeuvring of officials in Rome. Caution can easily morph into inertia.

Where there is a will, there is a way, but even with good will it will take time. The proposition put by O’Donohue and O’Collins begins to look attractive. Is there a maverick bishops conference (New Zealand would do it, or maybe Canada!) or even several who would approve the Revised Sacramentary as an interim semi-official resource, not to supplant the official Roman Missal (2010), but to be used in conjunction with it? Remember it was canonically approved by all the English-speaking conferences. This informal use ad experimentum would be invaluable experience as the painstaking work of revising the Missal took place.