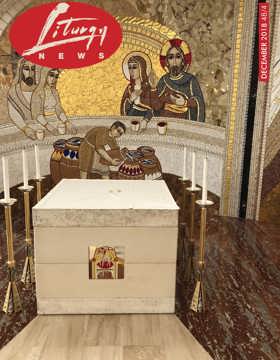 Stewardship and Renewal of Places of Worship

THE TOWN OF ROSEWOOD, 20 km from Ipswich in Queensland, was founded when the railway went through in 1860. In the final decades of the nineteenth century, coal and dairy made it prosperous. In 1910, a three-nave weatherboard church was built to accommodate a congregation of 1000 people. It is an extraordinary building that has been listed on the Queensland Heritage Register for 25 years. It is set on timber stumps with a corrugated iron roof and a vaulted pressed-metal ceiling. The town however has been in decline since the 1950s. Today, perhaps 75 people attend Sunday Mass.

St Brigid’s is now one of eight churches in the care of the parish of Ipswich which recently painted the exterior of the church and replaced the roof. The church is crying out for major conservation work and the renewal of its liturgical space. This is obviously beyond the resources of the small Rosewood community and even those of the parish as a whole. Yet the Church has a serious responsibility to preserve and enhance its patrimony.

The heritage value of the place extends well beyond the timber and tin. It encompasses not only the aesthetic and historic significance of the church but also its social and spiritual dimensions. What we see on site arises from the faith of a Catholic community, a faith which we still share today. In this place generations of Catholic families have been baptised, married and buried. The place enshrines the memory of the community and articulates its identity. The century-old church building inspires us because of the insight we receive today into the hopes and dreams, the worship and devotion of the Church to which we belong. Thus the building continues to play a role in the proclamation of the Gospel long after it was built.

But in order that it speak clearly and eloquently of the faith that formed it, the fabric of the building, its furnishings and fittings, its sacred vessels and vestments must be well cared for lest they witness only to obsolescence and decrepitude. Understanding the cultural heritage of a place begins with historical research and the development of an inventory-catalogue. Valuing the cultural heritage of a place engages the processes of conservation so that its significance is protected and enhanced.

One of the most important ways that we respect and value the cultural heritage of a place is to continue to use it for the purpose for which it was built. Continuity of use demonstrates most clearly that we are dealing with a living tradition. However the liturgy celebrated in the building today is not the same liturgy for which it was built over 100 years ago. Changing the fabric of a church building and renewing its furnishings and fittings for a reformed liturgy should not be seen as a detraction from a church’s heritage but rather as an enrichment. Change is often required to keep things the same. The process requires discernment, dialogue and negotiation; there are no ready-made answers.

These issues are explored in a new document on the stewardship and renewal of places of worship prepared by the National Liturgical Architecture and Art Board and approved by the Australian Catholic Bishops Conference. Called Fit for Sacred Use, it is a companion document to the 2014 guidelines And When Churches Are To Be Built: Preparation, Planning and Construction of Places of Worship.

The new book will be launched at a symposium to be held in Melbourne on 6-8 February 2019 entitled Where Your Treasure Is, There Will Be Your Heart Also – Catholic Liturgical Heritage. The symposium will attract architects and artists, pastors and students. At the same time, the Church will launch Cultura, the new Australian inventory-catalogue of cultural patrimony prepared by Catholic Church Insurance under advice from the National Architecture and Art Board. It will eventually form a national database of the temporal goods of the Church in Australia.

As for the historic church at Rosewood (and the many in a similar situation), perhaps it is the diocese which should establish a foundation so that critical heritage works can be undertaken and maintained into the future. In cases where no other options exist, sympathetic adaptive reuse should be considered. While preserving its essential features, can the Church make use of a building for a museum or community centre, a learning or retreat space, a centre for the arts? If a church building must be sold in order to preserve it, sacred furnishings and fittings should be removed and relocated. But this is a sad end for a place of cultural heritage significance.