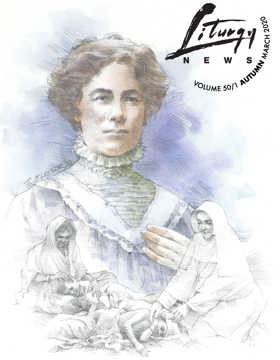 We don’t make saints. God does. With study and prayerful discernment, we can discover what God has done in and through people’s lives.

One of the most exciting developments in the Church over the last fifty years, is that the Church is learning to discover sanctity in our own time and in all corners of the globe. The revision of the liturgical calendar in 1969 emphasised the primacy of Sunday (the Lord’s Day) and the importance of the annual cycle of seasons (Advent-Christmas and Lent-Easter). Only saints of universal significance were retained in the General Roman Calendar; others were left to local commemoration. In Australia this is still an idea which is unfamiliar, but it is commonplace in Europe and elsewhere. We commemorate St Mary MacKillop as a solemn feast, but she is unknown and not listed in liturgical calendars in America or Europe.

It is important for the Church in Australia and the Pacific region to identify outstanding people who can serve as models for the Christian life in our part of the world and from whom we can seek the support of their intercession. This process demonstrates that holiness is possible in our own towns and streets, and helps us to inculturate the message of the Gospel.

How does the mechanism of canonisation work? The process begins in the local diocese with inquiry and reflection on who might be a suitable candidate for canonisation. There will often be a number of names in circulation with particular groups keen to push their preferred candidate forward. However it is the bishop of the place where the holy person died who inaugurates the ‘Cause’ for canonisation. Once the bishop declares the Cause open, the person receives the title Servant of God from the Holy See, a local Tribunal is formed and a Postulator is appointed. Evidence is gathered for and against the canonisation, theologians and canonists examine the person’s writings, the testimony of witnesses is recorded, and a biography is compiled.

The second step begins when all this material is submitted to the Congregation for the Causes of Saints in Rome. If the evidence points to true holiness, a decree of martyrdom or heroic virtue is issued at the direction of the Pope and the Servant of God is henceforth known as Venerable.

The third step is beatification when the holy person receives the title Blessed. Someone who has been declared a martyr may proceed directly to beatification. One who has lived a life of heroic virtue requires a miracle through their intercession before beatification. A miracle involves a further gathering of evidence and the testimony of medical experts. A ‘blessed’ may be included in the local liturgical calendar of the country or religious community to which they belonged.

Finally, when a second miracle has been determined through the intercession of one who has been declared ‘blessed’, the person may proceed to canonisation by the Pope. On being declared Saint, a holy person is held up as a universal model for veneration and imitation and as an intercessor for those on earth. A man or woman declared a saint is a human being. None is perfect. But a saint, someone transformed by God’s grace, can inspire us and help us.

There are four people from Australia and the Pacific who are travelling this pathway. The Cause is open and study is being undertaken for two Australian Servants of God: Mary Glowrey (1887-1957), a medical doctor who became a religious and lived and died in India; and Eileen O’Connor (1892-1921), who despite a serious physical disability, established Our Lady’s Nurses for the Poor. Then there is a religious from New Zealand who has been declared Venerable: Suzanne Aubert (1835-1926) who, with her sisters, ministered among the Maori people, setting up organisations for the care of children and babies and the destitute. Finally there is one person from our region declared Blessed: Peter ToRot (1912-1945), married man and father of three, who continued his work as catechist in Papua New Guinea during World War II for which he was imprisoned and executed. His commemoration in the Australian calendar is 7 July. These four will be featured on the covers of Liturgy News in 2020.

The process for canonisation can be long and time-consuming though Pope Francis has ensured that costs are kept to a minimum.

It is not hard to think of other suitable candidates from the local Church. Irene McCormack (1938-1991) was a Josephite sister martyred in Peru. She remained in her isolated, impoverished village despite the threat of guerrilla violence. Along with four men from the village, she was shot in front of the church. She is venerated in the village, a college in Perth is named after her, a biography has been written, and a human rights week is kept in Peru each year on her anniversary. However with changing bishops and parish priests in the diocese in Peru, the Cause of her sainthood has not yet been formally opened.

For a hundred years, Caroline Chisholm (1808-1877) has been proposed for sainthood. She became a Catholic at the time of her marriage and spent thirty years working independently for the welfare of women immigrants to Australia. Her story has been written a number of times and her Cause has been promoted by various organisations (including at one time the Catholic Women’s League). But she spent her last decade at home in England and, while there is some interest there, her Cause has not been taken up by the local bishop.

The St Vincent de Paul Society is considering putting forward Charles O’Neill (1828-1900), a young man who joined the Society upon his graduation as an engineer in Scotland. When, after a time in New Zealand, he migrated to Sydney in 1881, he founded the Society in Australia. In Brisbane, some would like to see movement on pioneering priest Joseph Canali (1841-1915), called the ‘Apostle of Brisbane’ for his renowned hospital ministry and holiness.

In the discernment process of future saints, we need to be clear on the criteria we are using to decide. Whom do we want to establish as models for living the Christian life in Australia today? Who will help us to understand ourselves and know our mission? Whose witness can help us to encounter Christ more deeply and revitalise the Australian Church?