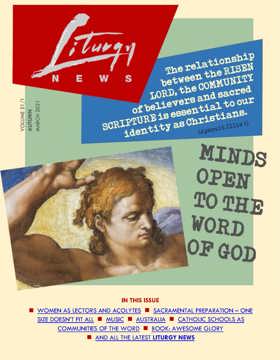 In mid-January 2021, Pope Francis adjusted Canon Law to allow women to be instituted as Lectors and Acolytes.  Perhaps the most common reaction in the news media was a ‘ho-hum’, saying that this is what we already do – the pope is just making it official.  However, an instituted Lector is not the same as a lay reader; and the Acolyte and lay minister of communion are likewise two different animals.

To understand why this is so, we need to go beyond the liturgical ministry they are seen to carry out and look at the background.

The twentieth century inherited liturgical structures called ‘Minor Orders’ which were steps on the way to ordination as deacons and priests.  After the rite of tonsure, candidates would be ordained in turn as porter, lector, exorcist, and acolyte as well as sub-deacon.  Only seminarians were given these offices as they proceeded through their training.  In 1972, Pope Paul VI suppressed these minor orders and left in their place two lay ministries of word and sacrament: Lector and Acolyte.  He made it clear that these were lay ministries into which one would be ‘instituted’ (not ordained) and new rites were prepared.  But because of their strong connection with the minor orders, these ministries at the time were still reserved to men.  Forty-five years ago, many of us were thinking this would soon change, but it never did until now.

Several years earlier, with the appearance of the General Instruction of the Roman Missal, lay men and women had been allowed to read the scriptures at Mass and to distribute holy communion, not as permanently instituted ministers, but on a ‘temporary’ basis.  When the permanent, instituted, male-only ministries were established, many dioceses in Australia preferred to continue with their rostered lay ministries.  They were open to all and could be undertaken for a suitable period of several years.  This seemed to articulate well the idea that all the baptised share an active role participating in the liturgy.

Pope Paul’s 1972 document, Ministeria quaedam, went to some trouble to articulate the relationship between instituted Lector and lay reader, between instituted Acolyte and lay communion minister.  The instituted Lector not only reads the scriptures but has greater oversight of the Liturgy of the Word, trains lay readers and takes part in sacramental preparation.  Thus he was expected to study and meditate on the word of God.  The instituted Acolyte not only helps with the distribution of holy communion inside and outside the liturgy, but is involved in a broader ministry of the altar and in training lay ministers of communion.  He was to devote himself to a deeper understanding and care for the Eucharist.  In practice, this often seemed to embrace the duties of a senior server or sacristan.

Fifty years ago, two areas in Australia embraced the institution of Acolytes – dioceses clustered around Perth and Sydney.  Perth currently has two thousand Acolytes on the books and still runs training courses.  Most parishes there have them.  They serve in tandem with lay ministers of holy communion (indeed a single set of ministry guidelines in the archdiocese covers Acolytes, lay ministers of communion and altar servers).  The rules indicate that only one Acolyte should be vested and serve at any particular Mass.  In the Sydney area, the Diocese of Parramatta which inherited the institution from Sydney when the archdiocese was divided in 1986, decided to discontinue having Acolytes a few years ago.  The Diocese of Wollongong has set a five-year limit on the ministry and treats the ministry seamlessly with adult altar servers and lay ministers of communion.

Negative aspects of the institution have appeared from time to time.  Perhaps because they are vested on the sanctuary during Mass, perhaps because it is a permanent ministry, there is an unfortunate tendency on the part of some to feel as though they are ‘set apart’ and should receive some precedence.  Requests have been made for Acolytes to vest and sit together as a group at diocesan liturgies.  I have had a visitor on holidays from Perth present himself at the sacristy in Brisbane announcing that he is an Acolyte, implying that space should be made for his ministry.  I am not suggesting that these things are common, but they have happened.  Normally now, where Acolytes exist, their ministry is restricted to their own diocese, oversight is given to the parish priest, and arrangements are made to refer those who move to another diocese.

It is, of course, essential that we take steps to include women in Church leadership and ministry.  This is the most positive aspect of the new disposition about Lectors and Acolytes.  We keep taking steps towards inclusion, albeit tiny ones!  Women who were readers were allowed to use the ambo in the sanctuary after 1970.  Female altar servers were permitted in 1994.  In 2016, women could even take part in the Holy Thursday ritual of the washing of the feet!  Now the instituted ministries of Lector and Acolyte are equally open to men and women.  It certainly removes a major stumbling block to the adoption of these ministries, but I wonder if this is sufficient reason to reactivate them in the 21st century.  At a time when the Catholic Church is constantly challenged by the ordination of women in other Churches, is it enough?  At a time when major research and discussion within the Catholic Church is addressing issues surrounding women in the diaconate, is it not far too little too late?

On the other hand, I see a possibility for careful and judicious use of these formal ministries.  A parish might decide, for example, that a lay person who has studied Scripture, who trains parish readers, who organises and leads bible discussion groups, who leads Sunday Liturgy of the Word, who is involved in sacramental preparation, might be a suitable candidate for institution as a Lector.  It would be good if their ministry was officially expanded to include preaching the homily.

Likewise a person who has studied theology and takes the lead organising holy communion for those in hospitals and nursing homes, who fosters eucharistic devotion in the parish, who trains and coordinates communion minister and altar servers, who prepares children for confirmation and first communion, who is the chief sacristan… such a person might be suitably installed as an Acolyte.  It would give our common baptismal lay ministry a stability, formal public and ritual recognition, along with an episcopal mandate.

Pope Francis’ change in this ministry is undoubtedly a positive thing, but it should be seen as just a small step to a much more inclusive future for the Church and its leadership.