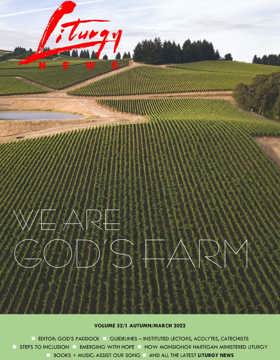 One does the planting. Another does the watering. God gives the growth. So we are fellow-workers of God: we are God’s farm, God’s paddock (1 Cor 3:9).

The Church is a piece of land to be cultivated, God’s farm. On that land the ancient olive tree grows whose holy roots were the Prophets and in which the reconciliation of Jews and Gentiles has been brought about and will be brought about. That land, like a choice vineyard, has been planted
by the heavenly Farmer. The true vine is Christ who gives life and fruitfulness to the branches, that is, to us who through the Church remain in Christ without whom we can do nothing (LG 6).

After an opening chapter on the Mystery of the Church, Lumen Gentium presents a chapter on The People of God and only after that does it deal with the hierarchy and the laity. The approach of the Council was revolutionary in that it did not begin with the pope, the bishops and clergy. Instead it began with Christ and recognised that the fundamental sacrament which constitutes the Church is Baptism. By it, all Christians are joined equally to Christ and bear the name Christian. Baptism is the sacrament of unity within which a diversity of ministries occurs.

The first chapter of Lumen Gentium offers some concrete images for the Mystery of the Church which we will explore this year on the covers of Liturgy News. We begin with the image of farm, field, vineyard. Then there are the images of the sheep in the sheepfold, the stones making up God’s building, and the spouse. Each of these images speaks of the centrality of Christ, and the Church as the pilgrim people of God who follow him. The image of the farm is used to speak of reconciliation and unity, tilled by God’s grace. The crop grows to harvest from many plants in one field (diverse plants which might even contain weeds) or as branches of the true vine which is Christ.

When the Council in its first document spoke of the liturgy, this same communal idea of the Church was in play. Christ always truly associates the Church with himself in this great work wherein God is perfectly glorified and the recipients made holy… In the liturgy the whole public worship is performed by the Mystical Body of Jesus Christ, that is, by the Head and his members. From this it follows that every liturgical celebration, because it is an action of Christ the Priest and of his Body which is the Church is a sacred action surpassing all others (SC 7).

This means that the liturgy is fundamentally the action of the whole Church, represented at a particular time by the assembly of the baptised. In turn, this is what the liturgy document means when it places ‘full, conscious, active participation’ as the first priority in the celebration of the liturgy.

The Church earnestly desires that all the faithful be led to that full, conscious, active participation in liturgical celebrations called for by the very  nature of the liturgy. Such participation by the Christian people as ‘a chosen race, a royal priesthood, a holy nation, God’s own people’ is their right and duty by reason of their baptism. In the reform and promotion of the liturgy, this full and active participation by all the people is the aim to be considered before all else (SC 14).

We have become accustomed to a variety of lay ministries in the liturgy and to the spoken and sung parts which the people contribute to the celebration. But we need to recognise what a revolution this was for most of the people sixty years ago who knew only the Tridentine liturgy. Previously, everything from the arrangement of the church space to the language and action of the liturgy indicated that the priest in the sanctuary
was the celebrant of the liturgy; yes, he was acting in the name of Christ, but he was the one who was the celebrant of the liturgy. The people were present passively to ‘hear Mass’, prayerfully following in their missals, but clearly outside the liturgical action looking in. Vatican Council II addressed itself to them saying that people at Mass should not be there as strangers or silent spectators (SC 48). Liturgical services are not private functions but are celebrations belonging to the Church, which is the ‘sacrament of unity’… [they] involve the whole body of the Church… (SC 26).

This is why it is ironical that present day followers of the old Latin Mass maintain that they accept the Second Vatican Council but still wish to use the old liturgical rites. There is an inherent contradiction in this assertion that is not just to do with the liturgical forms but with the fundamental ecclesiology which underlies and informs them. That is why in the middle of last year Pope Francis indicated that there needs to be a reorientation within traditionalist communities directing adherents towards the normative reformed liturgy.

The embrace of Vatican Council II and its theology – which the pope has been promoting so strenuously – goes beyond the liturgical forms and its underlying ecclesiology. It also embraces an ecumenical approach to other Christian Churches whose members are baptised into Christ, an affirmation of the importance of the Scriptures represented by the expanded Lectionary, and an open engagement with the world which we expect to discover in the liturgical preaching of the homily.

The image of the Church as God’s paddock illustrates the prime role of God the Farmer. It highlights the way God cultivates all the plants in the field, all the branches of the vine which respond by producing a rich harvest of grain or fruit. Our liturgy is exactly such a communal response to God’s grace.