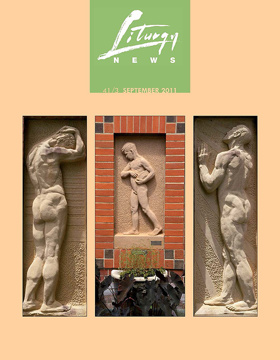 Priests and those who prepare the liturgy will need to get used to finding liturgical texts in unexpected places. Formerly, ICEL devoted quite some attention to structuring and ordering the liturgical books in such a way that they would be pastorally helpful for the English-speaking world. Now the arrangement of the book must follow the Latin editio typica exactly.

We will have to wait and see how clearly the sanctoral cycle is presented. It contains all the proper feasts for England and Wales, Scotland, Ireland and Australia. There are very many commemorations for these other countries which we will need to pass over. Will our very modest Australian calendar get lost? How have they handled feasts celebrated on different dates (in Australia, for example, St Mark is postponed to the day after Anzac Day)?

Perhaps most confusing is the fact that there is no longer a single collection of all the Prefaces in one place in the Missal. Prefaces used for more than one day are still to be found collected together within the Order of Mass (for example, Advent, Christmas, Lent, Passion, Easter, Ascension, Ordinary Time, Saints, Dead). Prefaces used on a single day are found with the prayers for that day, either within the seasons of the year (Baptism of the Lord, Sundays in Lent, Pentecost, Trinity, Sacred Heart, Christ the King) or within the cycle of Saints (Annunciation, Presentation, Sts Peter and Paul, Transfiguration, Assumption, Triumph of the Cross, All Saints, Immaculate Conception). Some Prefaces are found in two or three places (St John the Baptist, St Joseph, Ascension, Chrism Mass/ordinations, Trinity, Angels, etc). Some Prefaces are found with the Commons (Dedication of a Church); others are placed with Ritual Masses (ordinations, religious profession, dedication of a church and of an altar, and marriage – in the case of marriage, each of the three Prefaces is associated with a different Mass formulary); others Prefaces again are put with Masses for Various Needs and Occasions (Christian Unity) or Votive Masses (Trinity, Triumph of the Cross, Sacred Heart, Holy Spirit, Angels, etc). On occasion, cross references are given to the pages where the Prefaces are scattered throughout the Missal.

One could argue that the new arrangement of the Prefaces locates them right after the Prayer over the Offerings exactly where they are required. While this may often be true, it is not consistent for the seasonal Prefaces which are placed within the Order of Mass. Specific Prefaces will be difficult to find. For example, the readings on a certain day in Ordinary Time might make a perfect match with the Preface of the Holy Spirit, or the Triumph of the Cross, or Christian Unity. How will they be found?

One final example: The blessing and sprinkling of water which may replace the Penitential Act on Sundays no longer rates a mention in the Order of Mass. It is buried in an appendix at the back of the book. The leather-bound Missal will undoubtedly be beautiful to look at and luxurious to handle. But it will require close study by priests and liturgy committees if its contents are to be mastered and made accessible so that the volume becomes easily usable in the celebration of the liturgy.

The Mass ad libitum for Weekdays

Most commonly, when there is no feast or memorial on a weekday in Ordinary Time, the priest uses the Mass of the previous Sunday. For priests and communities celebrating frequent weekday Masses, repeating the Sunday prayers each day can quickly become tedious. At least, until now we have had the alternative Opening Prayer to provide a measure of variety. This prayer was a freer version of the same Latin original. The new Missal will have only one Collect literally translated from the single Latin text.

In actual fact, there are very many possibilities for the Mass prayers on these days. The Mass of the day may employ the prayers from any Sunday in Ordinary Time (not just the previous Sunday); further, one may celebrate the Mass of any optional memorial occurring on that day, or the Mass of any saint listed in the martyrology for that day with texts from a Common, or a Mass for Various Needs and Occasions, or a Votive Mass, or a Mass for the Dead. (See GIRM 355, 363, 381.) In planning the celebration, the priest should pay attention to the common spiritual good of the people of God, rather than his own inclinations (GIRM 352).

So there is a wide range of options for the entrance and communion antiphons, the Collect, Prayer over the Offerings, and the Prayer after Communion. Of course, unless there are special circumstances, the weekday cycle of readings would be preserved so that there is some continuity in the texts that are heard from one day to the next.

One of the main difficulties in exploiting the choices on offer is deciding how to make the selection and communicate it clearly to the liturgical assembly. I would like to propose a simple solution. Where the Ordo lists a weekday Mass ad libitum in Ordinary Time, we could take the date of the month and use the texts from the Sunday in Ordinary Time of the same number (on the twelfth of the month we use the Twelfth Sunday in Ordinary Time, and so on). With such a simple agreement, priest and people are on the same page. To trial this proposal, the Daily Mass Book 2012 published by The Liturgical Commission will arrange such a set of texts for the month. We will see whether it becomes a helpful way for communities to make their selections.