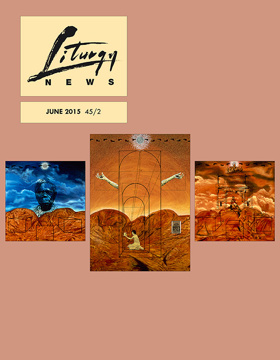 The Second Vatican Council tore down the walls which for too long had made the Church a kind of fortress.  Throw open the windows of the Church and let the fresh air of the Spirit blow through, the pope, St John XXIII, had said.  On the fiftieth anniversary of the end of the Council, Pope Francis will open the Holy Door of the cathedral of Rome, the Basilica of St John Lateran.  By this act, on 8 December 2015, he will throw open the doors of mercy and inaugurate a special Year of Jubilee.

We need constantly to contemplate the mystery of mercy.  It is a wellspring of joy, serenity, and peace.  Our salvation depends on it.  Mercy: the word reveals the very mystery of the Most Holy Trinity.  Mercy: the ultimate and supreme act by which God comes to meet us.  Mercy: the fundamental law that dwells in the heart of every person who looks sincerely into the eyes of brothers and sisters on the path of life.  Mercy: the bridge that connects God and people, opening our hearts to the hope of being loved forever despite our sinfulness (MV 2).

In the Bull Misericordiae Vultus, which announced the Jubilee of Mercy, Pope Francis points out that God’s mercy will always be greater than any sin and no one can place limits on the love of a forgiving God.  Mercy, he continues, is the very foundation of the Church’s life.  The Church’s renewed pastoral action is directed especially to those living on the outermost fringes of society and is centred on the corporal and spiritual works of mercy. (Corporal Works of Mercy: minister to the hungry, the thirsty, the naked, the stranger, the sick, the imprisoned, the dead.  Spiritual Works of Mercy: counsel the doubtful, instruct the ignorant, admonish sinners, comfort the afflicted, forgive offences, bear wrongs patiently, pray for the living and the dead.)

The pope desires that the message of mercy reach everyone, especially those whose behaviour distances them from the grace of God.  Specifically those who belong to criminal organisations and those who perpetrate or participate in corruption, he challenges to change their lives.  We need to respect justice but God goes beyond justice with his mercy and forgiveness.

In this Year of Mercy, coming immediately after the second Synod on the Family, we may reasonably hold the hope of an amnesty for those in irregular situations or those who seem trapped by rules or laws.  The traditional jubilee year held every fifty years (Lev 25:8ff) was linked to universal pardon and reconciliation.  Debts were forgiven, slaves were freed and the land was rested.  As Pope Francis said to the new cardinals he appointed in February, The way of the Church is not to condemn anyone for eternity; [rather] to pour out the balm of God’s mercy on all those who ask for it with a sincere heart.  The way of the Church is precisely to leave her four walls behind and to go out in search of those who are distant, those essentially on the ‘outskirts’ of life.  It is to adopt fully God’s own approach which is that of mercy.

The Church’s liturgy will necessarily play a vital role in the processes of Jubilee mercy.  The Jubilee will heighten the impact of the theme running through every celebration of the Eucharist.  We acclaim the wondrous works God has wrought in Christ with the response: Lord, have mercy. Christ, have mercy.  The penitential act not only opens our hearts to God’s mercy but affirms our solidarity with all those who stand in need of God’s mercy.  It is the love and mercy of God which establish an inclusive gathering of the Church for worship.  Indeed we go on to praise, bless, adore, glorify and thank God for his mercy in taking away the sins of the world.

Celebrating the Jubilee of forgiveness and universal pardon might prompt us to think of holy communion in an inclusive way as an acceptance of the always-open offer of God’s mercy.  In preparation for communion we sing Lamb of God, you take away the sins of the world, have mercy on us!  Jesus removes the barriers and we are blessed with the indulgence of God’s mercy.  May the receiving of your Body and Blood, Lord Jesus Christ, not bring me to judgement and condemnation, but through your loving mercy, be for me protection in mind and body and a healing remedy.  This prayer of the priest can be the prayer of all.

At the heart of the Jubilee year will be the penitential season of Lent.  The call to conversion at the beginning of Lent and the Lenten discipline of prayer, fasting and almsgiving are life-giving for the Christian people because they occur in the overarching context of God’s grace and mercy.  This will be the time to focus on the sacrament of Penance so that those who have experienced distance may draw close, those who feel cut off may be reconciled.

In a Collect drawn from the ancient Gelasian Sacramentary, we address God saying: you who reveal your power above all in your mercy and forgiveness…  Thus in our liturgy, the common phrase Almighty God is placed the context of a love that gushes forth from the depths naturally, full of tenderness and compassion, indulgence and mercy (MV 6).  If God throws open the gates of mercy, how can the Church build fences and walls?