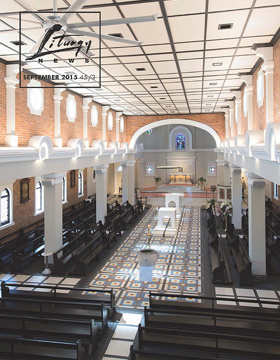 SYRIA AND THE LITURGY

The lowly vessel of soft clay the Potter took
and remade it into a vessel useful for glorious things.
The nature of Adam’s clay the Creator took
and fashioned it in water and heated it in the Spirit
and it acquired beauty…
Mercy which had fashioned it took pity on its fallen state
and descended to redeem it.

These lines from a poetic homily on the Epiphany by Narsai, fifth century Christian master from Syria, are a tiny example of a rich and ancient liturgical tradition.  Christianity in Syria goes back to apostolic times.  The Acts of the Apostles sets Paul’s dramatic conversion on the road to Damascus, Syria’s capital in the southwest.  Peter and Paul both ministered to the Christian community in Antioch, a Greek-speaking town at Syria’s northern border, and it was here that the disciples were first called ‘Christians’.  Liturgical historians stand in awe before an array of early source material from Syria; in the process of liturgical renewal called ressourcement (rediscovering our roots) Ancient Syria has played a crucial role.

The good news that Australia will welcome some thousands of refugees from Syria encourages us to reflect a little on the traditions from which they come.  It gives us the opportunity to appreciate Syria’s historical contribution to the development of Christian liturgy.

The majority of Syria’s 22 million people are Sunni Muslims, and Christians today constitute only 10% of the population.  We would expect this proportion to be reflected in groups who will come to Australia.  Most Syrian Christians belong to Eastern traditions: the largest and oldest is the Greek Orthodox Church with others belonging to the Armenian Apostolic Church and the Syrian Orthodox Church.  Some are members of Churches which are in communion with the Church of Rome: the largest group are Melkite Greek Catholics, with others belonging to the Syriac Maronite Church of Antioch, the Armenian Catholic Church, the Syrian Catholic Church and the Chaldean Catholic Church.  Australia is well placed to integrate Christian refugees.  The Greek Orthodox have a significant presence and the Catholic Church has structures for Melkite, Maronite and Chaldean Churches, as well as the Indian Syro-Malabar Church with historical links to Syria.  Members of these Catholic Churches may participate fully in the sacramental life of every Roman Catholic parish.

The fragmentation of Syria’s Christian population is a result of a turbulent history.  Already in the fifth century doctrinal divisions caused splits within Christianity.  Syria became part of the Islamic empire in the seventh century and was at times ruled from Egypt or Turkey.  Subsequently there were periods when the Byzantine empire had the upper hand. The developing split between the Catholic West and the Orthodox East resulted in shifting alliances for Syrian Churches between Rome and Constantinople.  In the twelfth century, the European Crusaders established Christian territories in Syria which lasted a century or two.  In the sixteenth century, Syria fell under the Turkish Ottoman empire until the twentieth.  It has been a history of both toleration and persecution.  The present political situation is impossibly complex with ISIS forces opportunistically entering an already brutal civil war between government forces and pro-democracy protestors.  Now millions – Christians and Muslims alike – have fled their homes to save their lives.

Syria helped shape Church thinking and practice for the first six hundred years of the Christian era.  Syrian sources provide scholars of the liturgy with texts and artefacts invaluable for reconstructing early liturgical developments.  ‘Syria’ in antiquity is ambiguous: it is a territory, culture and language.  Geographically it extended from Turkey to Israel and east to Iraq.  In culture and language, it embraced the largely Greek-speaking west centred on Antioch and the Syriac-speaking east centred on Edessa.

The East Syrian tradition is known for its symbolic and poetic literature, in which heaven and earth intersect and the ‘old’ paves the way for the ‘new’.  We began by referring to a poetic homily of Narsai; we could add those of Ephrem or Jacob of Serugh.  The earliest Christian hymnal, the Odes of Solomon, contains forty-two hymns which were likely written in Syriac.  There is a large number of Eucharistic Prayers originating in both East and West Syria, including one of the most influential and intriguing, the Anaphora of Addai and Mari from East Syria.  They help us understand the various elements of the Eucharistic Prayer and how they are related.

The famous third-century house-church of Dura Europos shows how Christians celebrated baptism and Eucharist; it is in eastern Syria.  Its baptismal space was decorated with frescoes now in the art museum of Yale university: the Good Shepherd, Adam and Eve, the woman at the well, David and Goliath, the healing of the paralytic, Jesus walks on the water, and a procession of women carrying light and water.

West Syria of the first five centuries has given us the evolving family of documents called ‘Church Orders’ which encompass the Didache, the Didascalia Apostolorum, the Apostolic Constitutions and the Testamentum Domini.  They describe the ordering of the Church community and the conduct of the liturgy; they give accounts of baptism and Eucharist, citing examples of liturgical texts and much other material besides.

The baptismal catecheses of Theodore of Mopsuestia (a town not far from Antioch) and John Chrysostom (who lived in Antioch for a time) give us detailed descriptions and interpretations of the rites of Christian initiation.  Syrian sources on the initiation process are fundamental to our understanding of the development of the sacraments of initiation, the nature of the catechumenate and its relation to the liturgical year.  Early Syriac versions of the Bible are of the greatest importance for the textual study of the Scriptures.

All of this is a very long time ago.  Naturally we do not expect Christian refugees from Syria to be educated in this liturgical history any more than we expect it of ourselves.  Yet an awareness of our indebtedness to Syrian liturgical traditions places current events into a broader context.