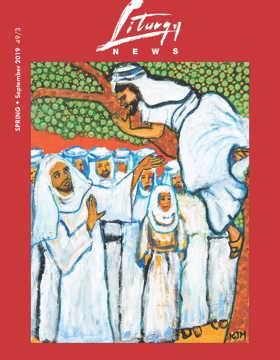 In recent years, we have seen gathering momentum across the Churches to celebrate a Season of Creation, beginning on 1 September, our first day of Spring, and continuing till the feast of St Francis of Assisi on 4 October. This year in May the Vatican department for Promoting Integral Human Development sent a letter to Catholic parishes extending a particular invitation to join the ecumenical family in celebrating the Season of Creation. Now, October would be a good time for the parish liturgy committee to review how this time has been celebrated in 2019, to assess what impact it has had in the parish community, and to plan how it might be recognised in the liturgy next year.

Celebrating the Season of Creation well in a Catholic community requires a clear understanding of our liturgy and a focussed discernment of what is and is not appropriate. Sunday Mass is not about teaching a captive audience or informing people on the issues of the day, no matter how worthy they may be. Liturgy is the mysterious ritual act by which we place ourselves into the realm of God’s saving grace. Liturgy always celebrates Jesus’ death and resurrection and our participation in it.

However, we can approach the liturgy from various perspectives. We already do this in the seasons of Christmas or Easter and on the feast days of the Virgin Mary or the saints. They give us a lens through which to appreciate the eternal good news of salvation. So too for days of special intentions – World Day of Peace, Mission Sunday or the Week of Prayer for Christian Unity – such commemorations give us a particular ‘take’ on the Sunday liturgy, but do not become the ‘theme’ of the liturgy. And this is how a focus on the environment and ecology should work in the new Season of Creation.

The recommendation for Catholic churches to celebrate a Season of Creation has evolved quite quickly since the 2015 encyclical letter of Pope Francis Laudato Si’ on care for our common home, the earth. Prompted by the suggestion and example of Bartholomew, the Ecumenical Patriarch of Constantinople, the pope established 1 September as the World Day of Prayer for the Care of Creation. This slots into broader initiatives taken by bodies such as the World Council of Churches and the European Ecumenical Assembly, as well as individual Orthodox, Protestant and Anglican churches and organisations. Recognising the Season of Creation in our liturgy offers us an opportunity to work ecumenically and to celebrate together the gifts of God the Creator.

A quick search of the internet will reveal a vast corpus of ecumenical educational and worship resources. And it is here that we need to be careful. Much of the material will only be suitable for ecumenical services or educational seminars. The Uniting Church in Australia, for example, has established a three-year cycle for the five Sundays between 1 September and 4 October with names such as Sky Sunday, Mountain Sunday, Fauna and Flora Sunday, Land Sunday, River Sunday… The Catholic Bishops Conference of the Philippines, very early adopters of the Season, propose a similar set of themes: Brother Sun, Sister Water, Brother Wind, Mother Earth, and so on. The danger for Catholic parishes is that these approaches and many of the resources provided turn the Sunday Mass into Sunday school. Of course they present invaluable content for seminars and discussion groups, for foyer displays and newsletter articles and much of this can be undertaken in cooperation with other Churches. But we must protect the integrity of the liturgy, its readings and prayers. We do not change the Lectionary readings or the Missal prayers.

The liturgy however offers us broad scope to honour the Creator and celebrate our common home. Eucharistic Prayer III opens by acknowledging that all you have created rightly gives you praise. Eucharistic Prayer IV has a special focus on the narrative of creation and recognises that when we sing the Sanctus we are giving voice to every creature under heaven. Other Eucharistic Prayers look forward in hope to the new creation, a new heaven and a new earth. The Prayer of the Faithful offers the opportunity to pray for the needs of the world, interceding before God to remove the injustice and oppression associated with poor stewardship of the world’s resources. Music and singing allow the assembly to praise God in creation and to express a yearning for wholeness and reconciliation.

The function of the homily is to build a bridge between the word of God and the lives of the people. Without imposing a theme and turning the homily into a sermon, there will be many opportunities over these weeks for the preacher to draw on the rich resource of Laudato Si’. This year, for example, the Gospel advice on 1 September to invite the poor, the crippled, the lame and the blind when you have a party speaks into the truth that the fruits of the earth are a shared inheritance for the benefit of all (LS 93). On the following week we hear the Gospel injunction to ‘carry our cross and follow Jesus’; this might evoke a reflection on the common good and justice between generations (LS 156-162).

Good Catholic resources have been increasing in recent times. The creation material provided by the Columbans has improved greatly; it now does respect the structure of the Lectionary and the patterns of Catholic prayer. The Catholic bishops of Ireland have some resources which might prove useful. But be careful searching the net: the mindset of organisations like Catholic Earthcare remains firmly catechetical and not liturgical.

Certainly the Season of Creation provides opportunities to educate and form Catholic communities. Certainly there are great ecumenical opportunities to undertake common work and prayer. And yes, there are ways in which these ideas can figure in our liturgical prayer. I just wish they hadn’t called it a Season of Creation because, liturgically, it is nothing like our seasons of Advent-Christmas and Lent-Easter.